What I'd ordinarily consider a reasonable bedtime (for a work night) came and went about an hour ago. However, I've been thoroughly absorbed in trying to complete a few tasks in my current pet project, The Bloody Glade. 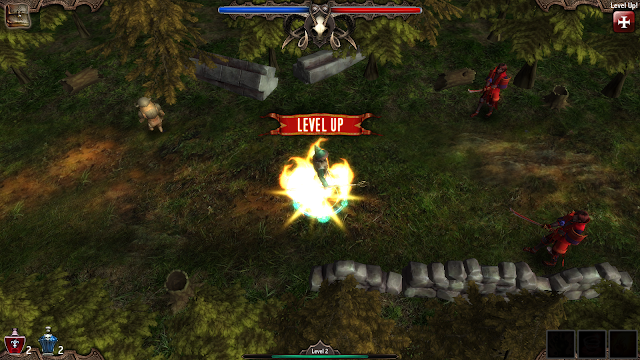 Levelling up... you have to press the button at the top right to select new spells.

I still have 3 spells to polish off, various bugs to fix, a few extra enemies to finish off (need to make them more interesting), and a bunch of miscellaneous tidbits to deal with. But I looked at the plan I had laid out for myself and it seems to progressing well. According to my previous schedule it looks like I am 80% of the way to what I had planned for the initial "somewhat finished" alpha version. 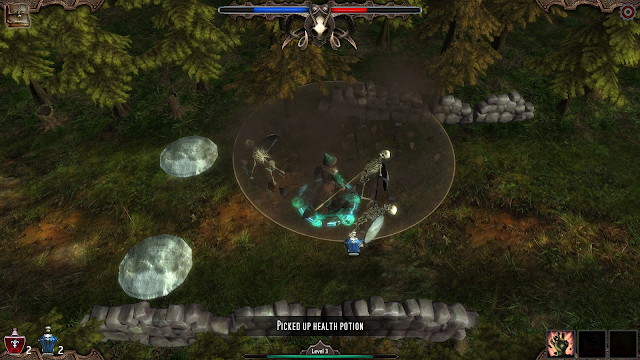 The Earth Shatter spell spews rocks and dust from the ground around the player. This is the lowest level variant. As you level up the spell it becomes more potent and visually dramatic.


Scope creep has unfortunately kicked in, though I'm trying my best to resist it. I'm keeping to my "cool stuff can be added with updates, get the initial game out there" philosophy and trying to complete it as per my initial design. With that as the goal it looks as if I'm almost there. But, of course, when you think it's 90% complete, it tends to only be about 50% complete in reality, so don't judge me if I'm wrong here (and I probably am).

The glorious early stages were characterized by fresh ideas and cool new features rolling in hard and fast. The late stages tend involve dealing with an endless list of bug fixes and hours and hours and hours of work that doesn't yield obvious tangible results to a casual onlooker. 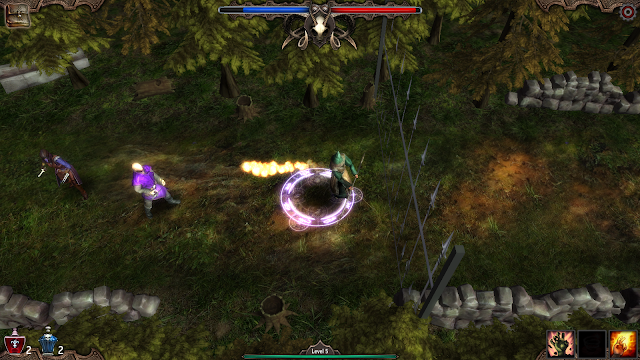 The wizard's level 1 fireball spell. It also looks far progressively more impressive as you level it up. 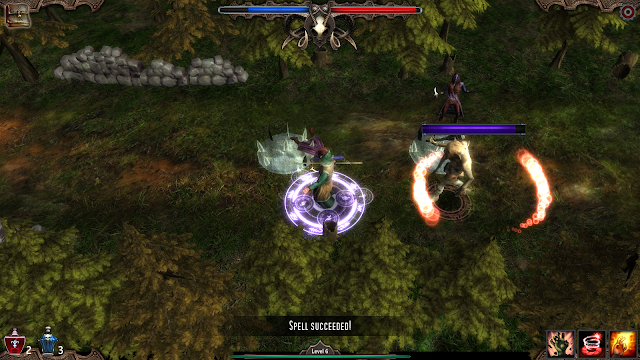 Hard to tell from the image, but there is a spike trap near the wizard with metal spikes that periodically thrust up and do damage to anybody foolish enough to be in close proximity. I want to add two more trap types, though doing so will add about two extra more nights of development (which, given that I only get a few nights a week to work on this, equates to about an extra week). Should be worth it though. 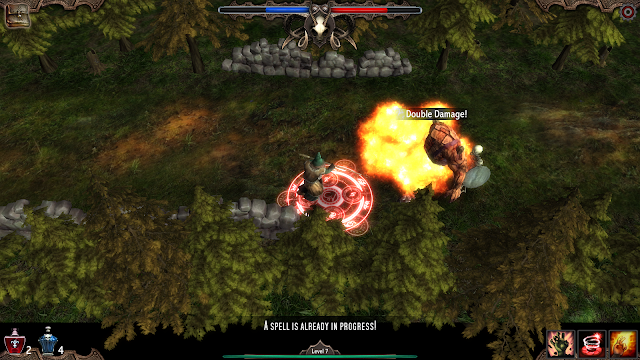 The wizard's fireball spell has been levelled up and now does explosive splash-damage. 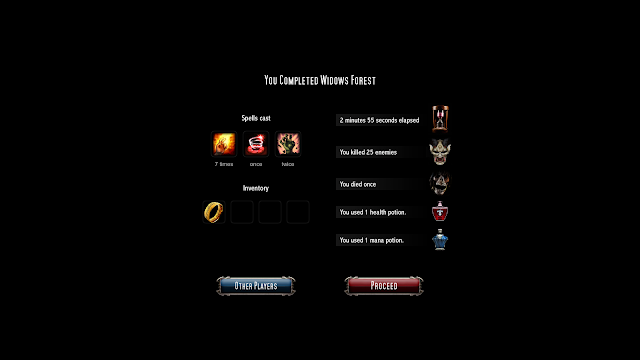 Various stats are displayed when you complete a level. I want a social aspect that allows you to compare how you did, what items you collected, which spells you used etc to other players (the 'other players' button accesses this functionality). I'm probably going to delay this for now though. 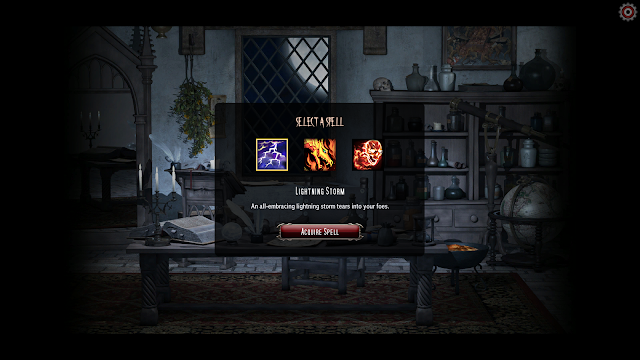 Selecting a new spell when you level up. 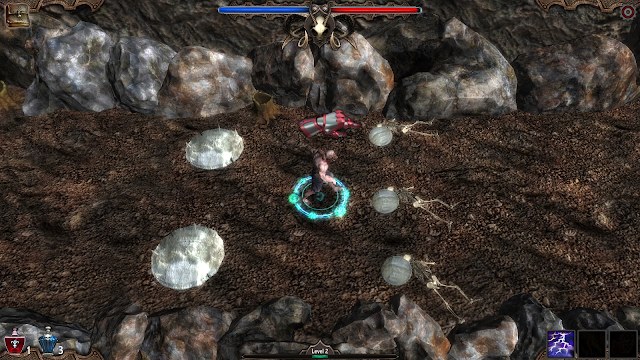 The abomination character is so bad-ass that skeletons pretend to be asleep as he approaches just so that he doesn't hurt them (not really though, I actually just insta-killed them with a debug cheat key). 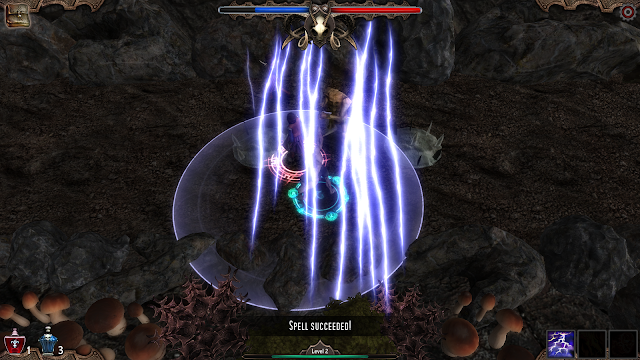 The enchantress has an area-of-effect lightning storm spell. 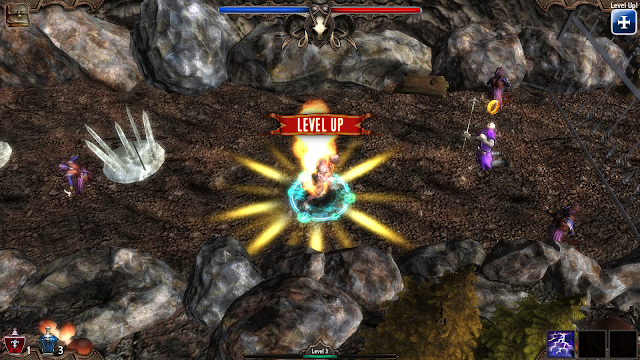 If you look carefully you can see the purple-robed fella to the right dropping a ring. The inventory system is deliberately very simplistic (I want to provide non-casual aesthetics to a more casual audience). 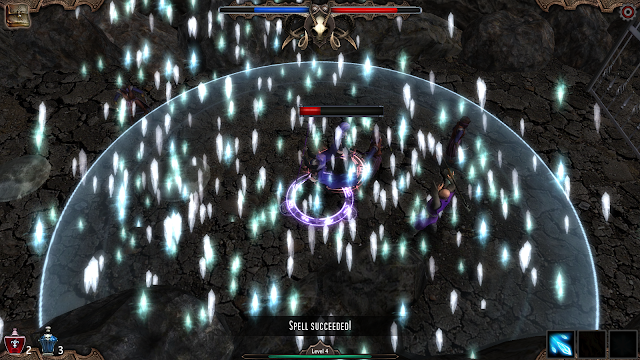 An ice storm spell inspired by fond memories of Warcraft 2 (which happens to be one of the old-school soundtracks I've often listened to while developing this all). 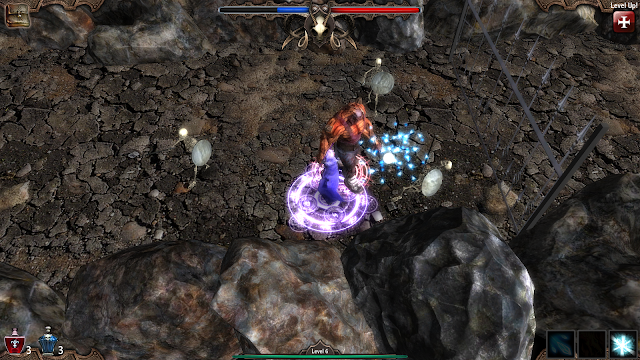 The wasteland scenario -- I am very fond of the ground texture. 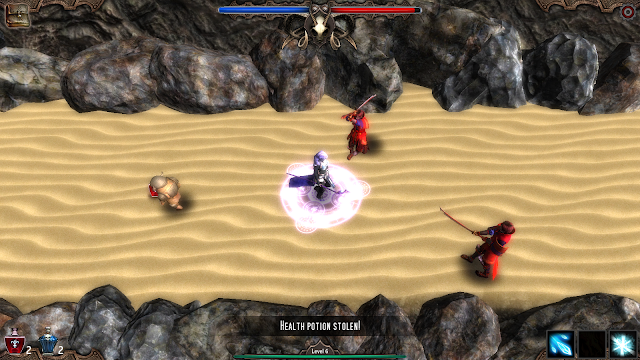 The little critter to the left just stole a health potion (he gives a hearty little giggle and taunts you as he does so). A friend who play-tested for me protested that it wasn't clear that you were about to be robbed -- that I should make it more obvious. "Bah! Nonsense!" was my response. I like it just the way it is. You'll know better next time.

In late January this year I was close to having Doombot Arena ready for release. At the time I wanted to focus on mini-games where I could keep the scope really small so that I could focus on actually releasing them and get familiar with the deployment process on the Apple store. I decided to leverage a lot of the work I'd done on Doombot Arena and build a similarly small-in-scope game based on time challenges. I started working on a racing game, but found that the standard techniques suggested for car physics in Unity to provide an experience that was not quite as fun, frantic and simple as I was looking for. And so I decided to change course and go for a spline-following approach. The result was No Crashy Spaceship, a game which is essentially an infinite-runner (a genre in which you attempt to dodge obstacles to see how long you can survive).

Note before I proceed: I have interspersed this wall of text with a few screenshots to make viewing this blog post less of a chore to read. 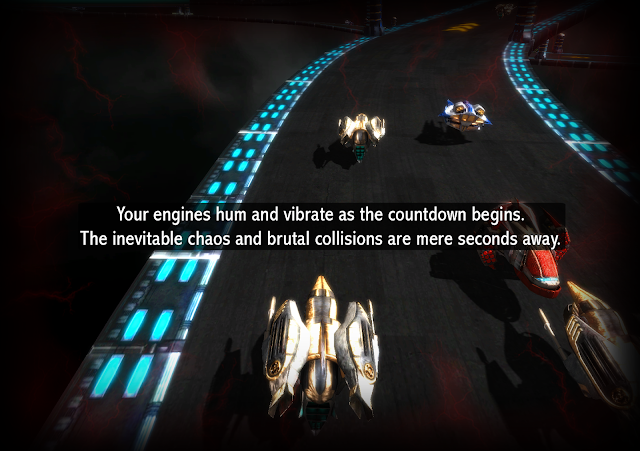 I have subsequently started working on games that are somewhat larger in scope -- games that I am more passionate about. As a result, my enthusiasm started to wane on this project (my larger projects running concurrently just offered more of a challenge). However, I recently decided (after looking at the graveyard of unfinished and almost-finished projects I have lying around) that I need to stay the course and make more of an effort to finish and release. 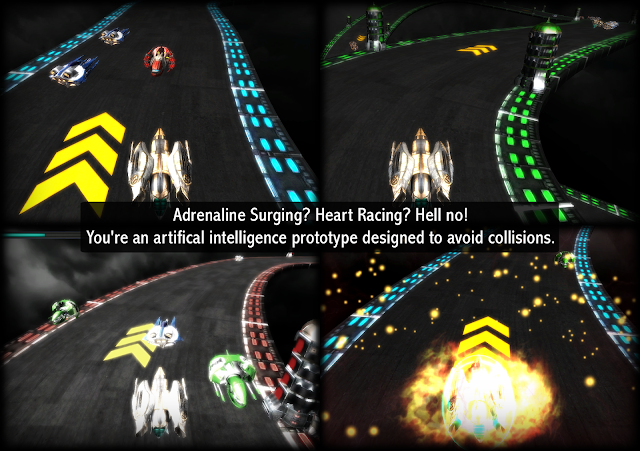 The overall look of the game was inspired by Tron (having watched the animated series I became quite fond of the dark background contrasted with bright lights; it's a unique sci-fi look that I feel is very effective). The initial work-in-progress name was 'Lunatic Skyway', but after chatting to some work colleagues about it we concluded that the name was a bit bland and generic. After throwing around a few names I threw out the whacky 'No Crashy Spaceship' idea (as a joke). There were laughs all-round and unanimous approval, and so I decided to go with it. Initially it was far more fast-paced and frenetic. I played it so much during testing that to me this felt like a suitable level of challenge. User-testing confirmed that I was utterly mad -- the game was completely intimidating to first time players. So I have toned it down a lot. When I watch friends play it on my iPad I'm always commenting about how I've made it too easy (the whole point in my mind was for it to be ridiculously difficult to simply not die almost immediately -- think Flappy Bird levels of frustration). However, not a single person who has tested it agrees and the consensus seems to be that having a slightly gentler difficulty curve makes it more fun. The speed does ramp up significantly with each lap though. I laughed when people were commenting how fast it gets a few laps in (my initial speed was WAY faster than that, even on the first lap). I think I have to acknowledge that I have an overly active brain though (and the attention span of a newt) -- a wiser course action is to accept that complete sensory overload isn't palatable to everyone. 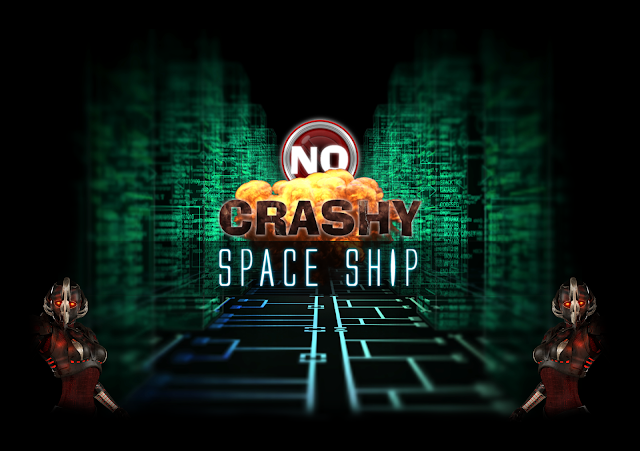 As it stands it is pretty much ready for release, though my latest play-through did uncover one or two minor bugs which I'll have to fix first. Creating the promotional screenshots (which are the images you see here) has been a bit of a trial because the Apple store requires images of various vastly differing resolutions and aspect ratios -- trying to cater for all is a bit of a nightmare. This is one of the tasks that I have been avoiding. I could have released a few months back had I not been so reluctant to just whip myself on the back (like a Catholic monk fervently self-flagellating himself) to inspire enthusiasm and force me to go through the schlep of it all. 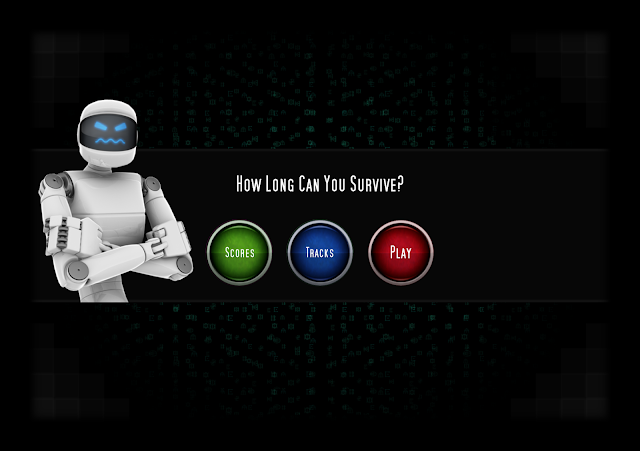